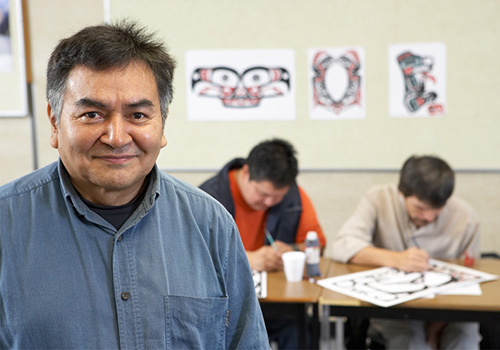 Dempsey Bob is a master carver from Telegraph Creek, British Columbia. He began carving in 1969 and was directed to the Gitanmaax School of Northwest Coast Indian Art in 1972 by Freda Diesing, who was his earliest mentor and teacher. His bronze and wooden sculptures blend traditional narratives and iconography with contemporary influences. Bob’s exposure to oral histories, songs, and dances from a young age has contributed to his understanding of art and its purpose within a community. Equal parts traditionalist and vanguard, Bob’s animated sculptures acknowledge the lineage to which they are indebted, but refuse to be nostalgic, instead welcoming newly realized characters and iconography from the age-old stories of his people.