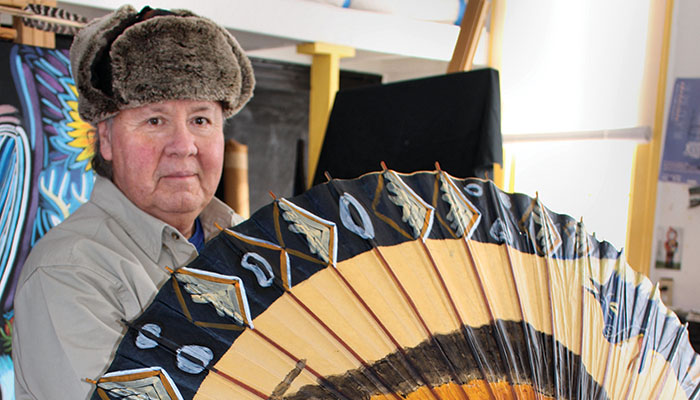 G. Peter Jemison, of the Heron Clan from the Cattaraugus Territory, Seneca Nation, is a Seneca artist and site manager of Ganondagan, a New York State Historic Park in Victor, New York. His artwork has been shown internationally and his writings have been widely published. Ansley’s Fish represents the traditional, sustainable Native American approach to agriculture. A fish, wedge of watermelon, and strawberries represent the elements of harvest to be enjoyed; while the handmade Kraft paper bag resembling a mass-produced grocery bag serves as a reminder that our crops originate from the earth, which should be respected.

Mr. Jemison is very active politically as an advocate for Native American rights. Peter managed the AICH as the founding director from 1978 to 1986 and opened the Seneca Art & Culture Centre at GAnondagan in October 2015. He was chairman of the Haudenosaunee standing committee on burial rules and regulations, fighting for the return of sacred objects from the antiques market to native peoples. He has been a spokesperson on related topics, and has participated in numerous symposia, including a panel discussion held at the Center in the 1980s. He was one of the founders of the Museum of the American Indian in New York City. His book, The Treaty of Canandaigua 1794 has been favorably received as an important contribution to history. In Western New York Jemison was curated and participated in exhibitions; for example, he was guest curator and wrote a catalog essay for The Pan-American Exposition Centennial: Images of the American Indian held at the Burchfield-Penney Art Center in 2001. Most recently, Peter opened the Hodinoshoni Juried Art Show in November 2021 and his work is currently on view in Greater New York at MoMA PS1 in New York City.