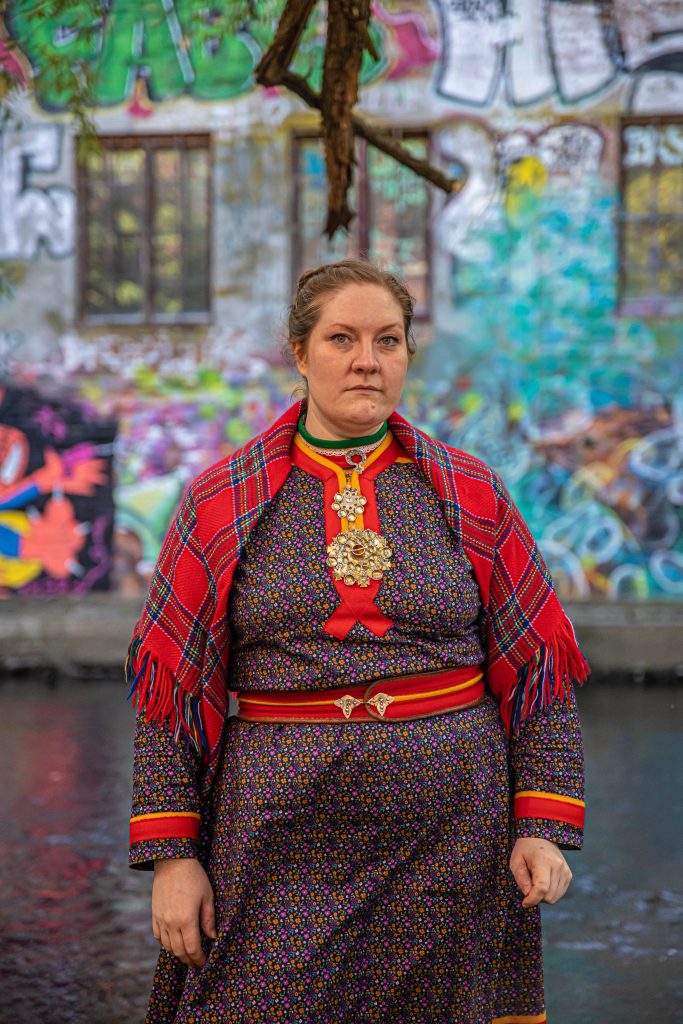 As a long-term practitioner of duodji (Sámi practices of aesthetics and storytelling), her PhD in museology combined her practice with an Indigenous research focus that looked into duodji as a Sámi system of knowledge; the devastating effect of the colonial epistemicide on the practice of duodji; and how Sámi communities today work to re-remember practices within duodji and in the process negotiate Sámi identities; and lastly, how museums with their vast collections of Sámi heritage objects play into these processes. Extending from this research, she curated the seminar ‘Dåajmijes Vuekie – the material expressions of Sámi aesthetics’, which was convened during the Sámi Art Festival of 2019. The same year she was also the curator of a seminar convened jointly by Office for Contemporary Art Norway (OCA) and Norwegian Crafts (NC) relating to the United Nations International Year of Indigenous Languages, entitled ‘Båassjoeraejken Tjïrr – Workshops and conversations on Indigenous languages, aesthetic practices and landscapes’.

She is currently based in Tampere, on the Finnish side of Sápmi, where she is doing postdoctoral research in connection with ‘Mediated Arctic Geographies’, a project that aims to look at how Arctic geospheres are aesthetically shaped and mediated to become vehicles of environmental, geopolitical and social concerns at Tampere University. Her specific focus is on the relation between Indigenous aesthetics in the Arctic and land.

Finbog, together with ‘The Sámi Pavilion’ co-curator Beaska Niillas and poet-in-residence Timimie Gassko Maräk, is a founding member of Hásstuheaddji collective, a Sámi led think-tank that gather thinkers, performers and artists to dialogue and reflect. The collective have performed at Mađđi, a new interdisciplinary art and culture space in Tromsø and will also perform at the upcoming Arctic Art Summit 2022 and the Sámi music and cultural festival of Márkumeanno 2022.

Finbog is also a collaborator on the research project ‘The Space Between Us’ that strengthens intellectual relationships among nations with shared colonial histories in Canada, the Circumpolar and Pacific regions, connecting to digital and new media technology in the future.

She was also a session leader in the recent Momus Emerging Critics Residency to help guide emerging critical writers develop texts that are informed by the breadth of global Indigenous art criticism, cultural protocols and citational practices.

Her written works include contributions to collective works such as ‘Research Journeys In/To Multiple Ways of Knowing’ (2019), articles in Nordic Museology (2015) and in the digital platform ‘Action Stories’ (2021), as well as several upcoming works, including her first book, It Speaks to You – Making kin through people, stories, and duodji in Sámi Museums’ (2022).