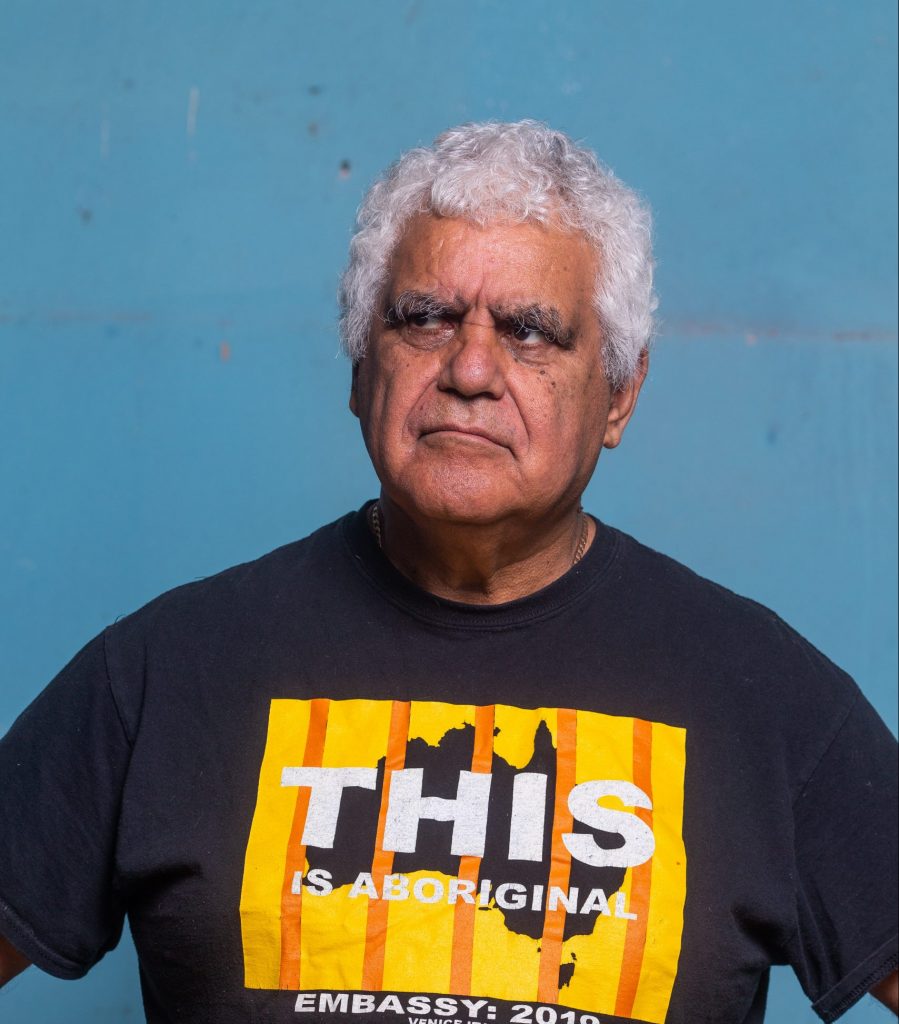 Richard Bell (b. 1953) lives and works in Brisbane, Australia. He works across painting, installation, performance and video. Bell is one of Australia’s most significant artists and his work explores the complex artistic and political problems of Western, colonial and Indigenous art production. He grew out of a generation of Aboriginal activists and has remained committed to the politics of Aboriginal emancipation and self-determination. In 2003 he was the recipient of the Telstra National Aboriginal Art Award. Bell is represented in most major Australian National and State collections, and has exhibited in a number of solo exhibitions at important institutions in Australia and America.

In 2013 he was included in the National Gallery of Canada’s largest show of International Indigenous art, Sakàhan, and at the Fifth Moscow Biennale of Contemporary Art. In 2014, Bell’s solo exhibition Embassy opened at the Perth Institute of Contemporary Arts, Perth. In 2015, Bell presented a collaborative exhibition of new work with Emory Douglas at Milani Gallery, and exhibited his major work Embassy 2013-ongoing as part of Performa 15, New York City and the 16th Jakarta Biennale, curated by Charles Esche. Bell also premiered a body of new work as part of the Queensland Art Gallery/Gallery of Modern Art’s 8th Asia Pacific Triennial of Contemporary Art, Brisbane. In early 2016, BELL invites… an exhibition of Bell and work by friends and collaborators opened at the Stedelijk Museum SMBA, Amsterdam, and premiered a new sculptural commission as part of Sonsbeek 2016 at the Dutch Art Institute in Arnhem, Netherlands. Bell presented his Embassy as part of the 20th Biennale of Sydney, curated by Stephanie Rosenthal, at Cairns Indigenous Art Fair, the Institute of Modern Art, Brisbane, and most recently as part of the Jerusalem Show VIII. In 2017, Bell exhibited in The National: New Australian Art, a comprehensive survey of contemporary Australian art presented by the Museum of Contemporary Art, Art Gallery of New South Wales, and Carriageworks, Sydney. In 2018, he presented his solo exhibition Dredging up the Past at Gertrude Contemporary, Melbourne. In 2019, Bell took his Embassy project to the Venice Biennale as a collateral event and presented work at Padiglione d’Arte Contemporanea Milan. In 2021 Bell has a major solo exhibition at the MCA Sydney. In 2022 Bell will be presenting Embassy at the Tate Modern.