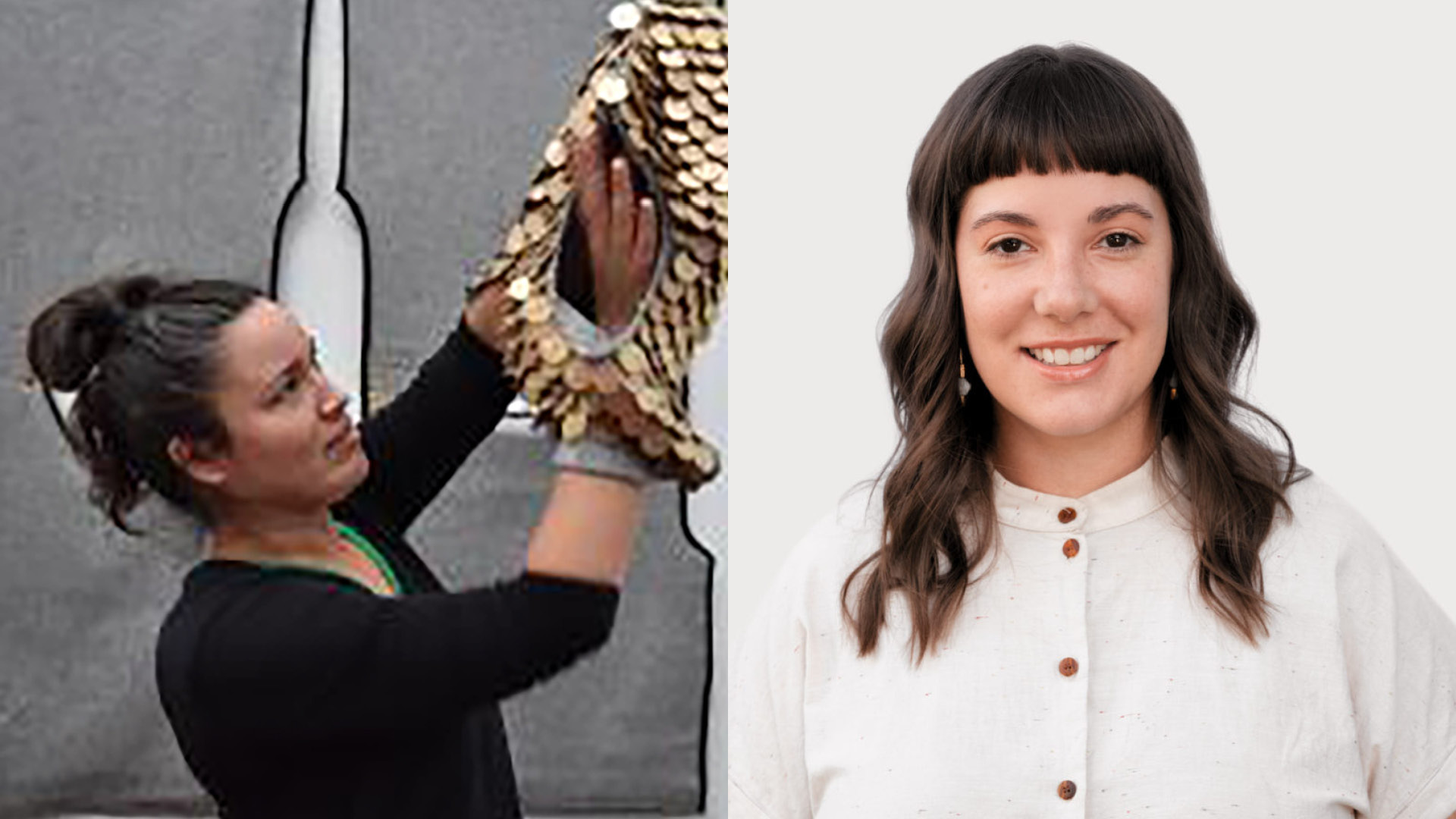 A conversation between artist Hupfield and curators Hogue and Migwans on the way performance can change museum practice and how artists take their performance ephemera into the museum as objects. Lastly, how objects can become embodied when performed.

Tarah Hogue is a curator, writer and cultural worker based in Saskatoon, Canada, located in Treaty 6 territory and the homeland of the Métis. Her work is invested in the capacity of art and artists to envision and enact otherwise ways of being in the world, while seeking to unsettle settler colonial frameworks by prioritizing Indigenous knowledges in dialogue with other cultural communities.

Maria Hupfield (she/her) is an artist and transdisciplinary maker working with Industrial felt at the intersection of performance art, design and sculpture; an Assistant Professor in Indigenous Performance and Digital Arts,, and Canadian Research Chair in Transdisciplinary Indigenous Arts, Director / Lead Artist of the Indigenosu Creation Studio, Department of Visual Studies / English and Drama, at the University of Toronto Mississauga. Her work with Industrial felt, performance forms, and present day materials crosses boundaries and operates at the intersection of Anishinaabek cultural knowledge / methodologies and Western based art practices. She is Canadian like her white settler father, and Anishinaabe like her late mother, and belongs to Wasauksing First Nation, Ontario, Canada. Her work in the institution seeks to promote accountability to Indigenous people; and looks to model new ways of connecting with Indigenous communities through arts-based practices; and establish respectful ongoing relationships with Indigenous peoples, language, and land. Her current research has three components that function as interventions and sites of learning: 1) Community Medicine Garden; 2) Indigenous Creation Studio; 3) Living Archive. She is a current 2020-2022 inaugural Borderlands Fellow for the project Breaking Protocol at The Vera List Center for Art and Politics at the New School and the Center for the Imagination in the Borderlands at Arizona State University, and was awarded the Hnatyshyn Mid-career Award for Outstanding Achievement in Canada 2018. Founder of the 7th Generation Image Makers, at Native Child and Family Services of Toronto, she co-owns Native Art Department International with her husband artist Jason Lujan, and is also a founding member of the Indigenous Kinship Collective NYC.

Hupfield has exhibited extensively including the solo exhibition Nine Years Towards the Sun, at the Heard Museum, Phoenix (2019–20), following her first major touring solo exhibition, The One Who Keeps on Giving, organized by The Power Plant Contemporary Art Gallery, Toronto (2017–18). She has presented her work at the National Gallery of Canada in Ottawa; the Smithsonian Institution, National Museum of the American Indian, New York; the Museum of Arts and Design, New York; the BRIC House Gallery in Brooklyn, New York; the Bronx Museum, New York; Gibney Dance, New York; the Boston Museum of Fine Arts; Site Santa Fe; the Montreal Museum of Contemporary Art; the Nordamerika Native Museum in Zurich, Switzerland; Panoply Performance Lab, Brooklyn; the Montreal Museum of Fine Arts; and Galerie de L’UQAM in Montreal.

Mikinaak (Crystal) Migwans is a member of Wiikwemikoong Unceded Territory and Assistant Professor of Indigenous Contemporary Art in Canada at the University of Toronto with a cross-appointment as Curator of Indigenous Art at the U of T Art Museum. Their research and pedagogy is focused on Indigenous relations in museum and gallery settings, the power of makers, and the politics of place-making, with special attention to weaving, women, and water relations in the northeast. Their dissertation at Columbia University explores the natural fibre weaving traditions of the Great Lakes, especially the bulrushes which Renee Wasson Dillard has called “the first water protectors.” Migwans has worked with the Great Lakes Research Alliance for the Study of Aboriginal Arts & Culture at Carleton University, the Ojibwe Cultural Foundation in M’Chigeeng First Nation and the National Gallery of Canada in Ottawa.